The mission of the Finland-Israel Association in Espoo is to boost business, technology and innovation collaboration between Espoo and Israel 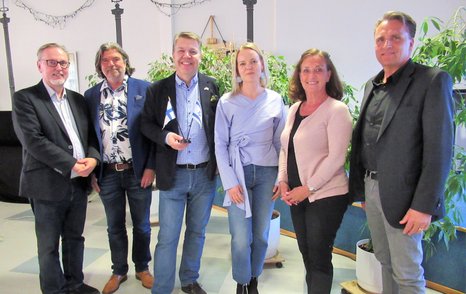 Simon Elo missing from the photo.

Information on City of Espoo

Espoo is the second biggest and the fastest growing city in Finland. Espoo companies are responsible for around 50 % of the turnover in the Helsinki Stock Exchange.

Espoo is a home of city booming startup scene, multiple headquarters of global corporations, hundreds of innovative SME's and companies in knowledge-intensive sectors. Many commute daily to Espoo from the neighbouring municipalities in the Helsinki Metropolitan Area.

The city is has gained international fame as a hub of know-how, research and development, at the heart of which stands the Aalto University campus.

Large natural areas are characteristic of Espoo: seashores, the archipelago, the wilderness in nature reserves and the waterways of the lake highlands. The cultural landscapes, constructed environments and natural areas of Espoo are like Finland in miniature.

24 % of the Helsinki capital area population live in Espoo

over 51 % of residents hold a university degree

24 % population growth within next 20 years

The area around Espoo is a thriving region that covers Stockholm, St. Petersburg and Tallin. Its direct neighbours are Helsinki, the capital of Finland, and the Airport city of Vantaa.